Please hold while we process the request.

Why do we need O-RAN when we already have 3GPP interfaces that are Open and Standardized?

Have you ever thought about why the Open RAN Interface is getting so much attention these days? Well if you do, then you are in the right place.

Earlier, the Communication Service Providers (CSPs) used to buy hardware and software together from primarily a single vendor only. However, nowadays, they are focusing their attention mainly on the Open RAN (O-RAN) Interfaces. With O-RAN, they can now opt to choose different vendors for different components of the RAN. This eliminates the vendor-lock situation and results in faster deployment and better management of the network.

But don’t you think that even when the networks use 3GPP interfaces that are already open and standardized why is Open RAN being preferred?

Well, let’s dive into our first question, “ What are 3GPP Interfaces?”

What are 3GPP Interfaces?

The 3GPP( 3rd Generation Partnership Project) is an engineering organization that develops new technologies (or technical specifications) for the third generation of mobile networks.

There are three Technical Specifications Groups each of which consists of multiple WGs:
The first one is the Radio Access Network, then the Service and System Aspects, and lastly the Core Network and Terminals.

Here, we will focus on the Radio Access Network and the interfaces in the RAN:

Even though these interfaces are open and standardized by 3GPP, we will see what is the need for Open RAN.

Why do we need Open RAN Interface?

Well, in the simplified 4G RAN network there are two interfaces that make us answer our question as to why we need the Open-RAN. The first is the Fronthaul and the second is the X2 Interface.

The interface between the virtualized BBU Software (DU/CU) that runs on the COTS server and the Remote Radio Head (RU) is the Fronthaul interface.

Basically, in the cellular network deployment, radio units and antenna systems were often separated from their baseband units for analog radio frequency (RF) signals. The distance was bounded from the top of the tower to the bottom. When service providers saw the cost advantages to pool their basebands units in a central location to serve the antennas on many towers, it got the name of fronthaul connection. This Fronthaul Connection, so-called since used the CPRI protocol which wasn’t necessarily “open” as it came with some vendor-specific implementations, high bandwidth, and latency variation constraints.

The O-RAN having the multi-vendor approach used different “Open Alternatives” so that they aren’t limited to 5G only but can be used in 4G and other ethernet-based open fronthaul as well. For Instance, the Open-RAN Alliance explains the eCPRI to be used with Split 7 or the Small Cell Forum representing the N-FAPI to be used with Split 6.

Mobile networks are in the process of transitioning to Long Term Evolution, a Fifth Generation (5G), all packet network architecture.  It will permit high data rates to smartphones and also reduce latency to support new applications like the Internet of Things (IoT), and Artificial Intelligence.

Since LTE, most of the RNC (Radio Network Controller) functionality has been moved to the eNBs (LTE Base Stations). 3GPP defined the eNodeBs can coordinate in a peer-to-peer fashion over a new interface called the X2. It extended it to 5G and named it the Xn interface.

The X2 or Xn is the linked interface between two eNodeBs in the LTE network or two gNBs in the 5G network. It aids both the User Plane and Control Plane. It helps in Mobile Optimization, Mobility of UEs( User Equipment) between eNBs/gNBs, cell activation, and Network Optimization, etc.

Even though it has a lot of functions and is quite useful in a 4G network, it is an optional interface. Many RAN vendors used proprietary messages over this interface which resulted in ensuring that the multi-vendor networks were difficult for an operator to deploy.

Therefore implementing them became difficult and hence the need to make them “open”. 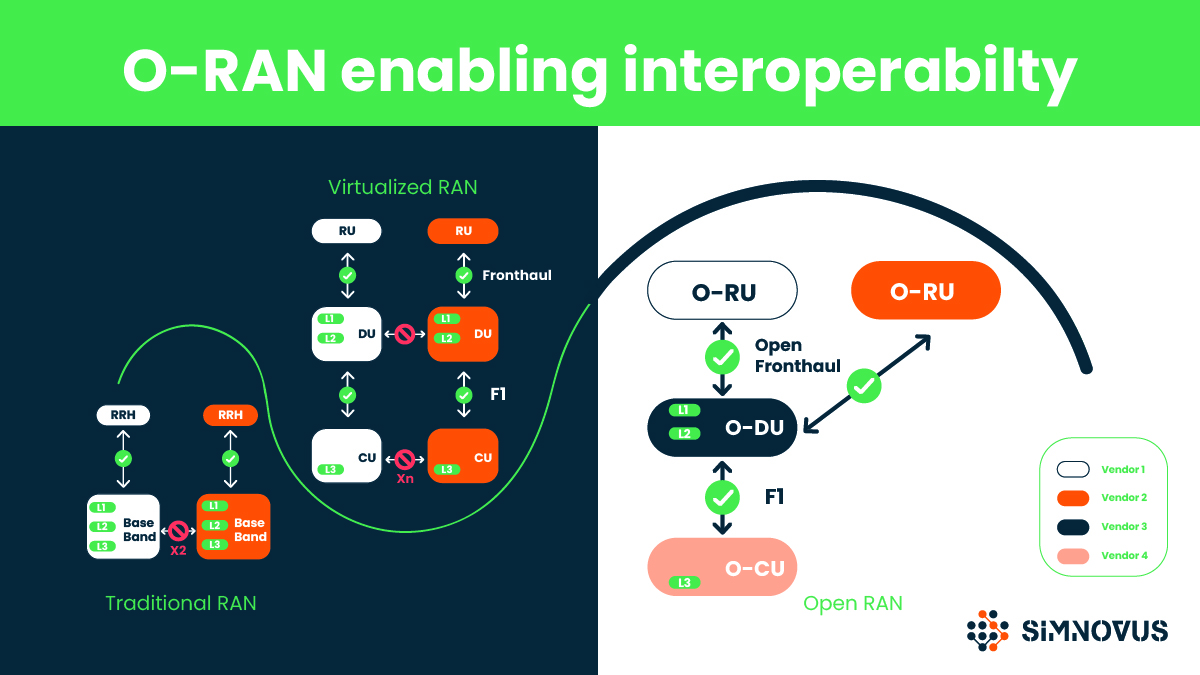 Today all the 5G deployments are 5G Non-Standalone (NSA) Deployments. This means that the 5G RAN is used to access the network by working in conjunction with the 4G LTE access network and the EPC, also known as 4G Core.

But such cases cannot be implemented due to a lack of resources.

That is why we need Open RAN even when 3GPP interfaces are already open and standardized.

Let’s see what all interface options do the Mobile Network Operators (MNOs) have to create an O-RAN Network!

Realizing the economic benefits of Open RAN Architecture by implementing the interfaces to be open, the Industries are setting up teams and making innovations through opening up 3GPP interfaces or using O-RAN Alliance, or Small Cell Forum.

The first option to create an O-RAN Network is to have vendors open up interfaces between the RAN components like radio and the BBU/CU/DU software. Established on this, some communication service providers have gathered a greenfield mobile network with commoditized hardware accompanied by a trench of software from various vendors. They have also convinced the Tier-1 vendors to open up their optical networking and radio equipment for an open RAN.

Nokia said its “accelerated investment in and a firm commitment to O-RAN provides CSPs as well as regulators and political decision-makers with greater assurance that they can embrace openness to secure their telecom supply chain, without concerns about the competitiveness and/or security of their 5G infrastructure.”

The second option is to use O-RAN Alliance defined interfaces. The O-RAN has published a new RAN Specification and develops, drives, and enforces standards to ensure that equipment from multiple vendors like RUs and DU/CU software interoperates with each other. For instance, the Fronthaul specifications for the RAN functional splits ensure interoperability and generate profiles for interoperability testing.

To develop interoperable O-RAN Solutions, O-RAN Alliance and the Telecom Infra Project have announced a liaison agreement. They believe that,

“Alignment on O-RAN interoperability efforts will help the industry to speed up the delivery of commercial open RAN solutions. The establishment of the first joint O-RAN Open Test and Integration Center (OTIC) with the TIP Community Lab in Berlin is a concrete step to facilitate this multi-community approach.”

The third option is to use the ecosystem created by the Small Cell Forum for Open RAN with small cells. To create these small cells they construct components provided by different vendors piece by piece so that they can label the varied mixture of 5G Use Cases. The open Interfaces known by the name of FAPI enable the vendors to mix PHY & MAC Software from different suppliers. The nFAPI being the network interface allows the mixing of  Distributed Units(DU) and Centralized Units (CU) from different vendors to enable the connection of a small cell radio unit with the small cell CU/DU.

Since the Open RAN unfolds the multi-vendor RAN system and introduces more software into the telcos’ networks it helps in reducing their cost and diversifying their supply chains. This is why the O-RAN constantly demands interoperability and requires validation.

Therefore, we at Simnovus help you to validate the 5G RAN by bringing our software mindset to it. With our UE Simulator Software (runs on COTS and SDR) you will get predictable budgeting as you take the advantage of subscription licensing. All the current features including 3GPP updates will be delivered at no cost while your subscriptions are active.

All your testbeds are full-featured and consistent as our Simulator Software is all-inclusive.

Power of Automation in the Open RAN

This website uses cookies to improve your experience while you navigate through the website. Out of these cookies, the cookies that are categorized as necessary are stored on your browser as they are essential for the working of basic functionalities of the website. We also use third-party cookies that help us analyze and understand how you use this website. These cookies will be stored in your browser only with your consent. You also have the option to opt-out of these cookies. But opting out of some of these cookies may have an effect on your browsing experience.
Necessary Always Enabled
Necessary cookies are absolutely essential for the website to function properly. This category only includes cookies that ensures basic functionalities and security features of the website. These cookies do not store any personal information.
Non-necessary
Any cookies that may not be particularly necessary for the website to function and is used specifically to collect user personal data via analytics, ads, other embedded contents are termed as non-necessary cookies. It is mandatory to procure user consent prior to running these cookies on your website.
SAVE & ACCEPT